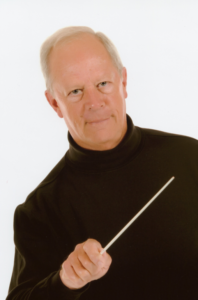 Mr. Ridley has been involved with music all his life. He earned both BA and MA degrees in music from California State University Long Beach where he studied conducting under H. Robert Reynolds. During his time at CSULB he studied clarinet with Kalman Bloch of the Los Angeles Philharmonic Orchestra. He also holds a Lifetime California Teaching Credential and an Administrative Services Credential.

Tom enlisted in the 72nd US Army Band as a clarinet player and also acted as Assistant Conductor. He taught instrumental music and served as Assistant Principal in Southern California high schools. Following his career in education, he became a sales representative in the financial printing industry. He then established his own printing brokerage company and remained self-employed for 23 years.

During the time his three sons were growing up, Tom spent 15 years serving school age children in the Huntington Beach area.